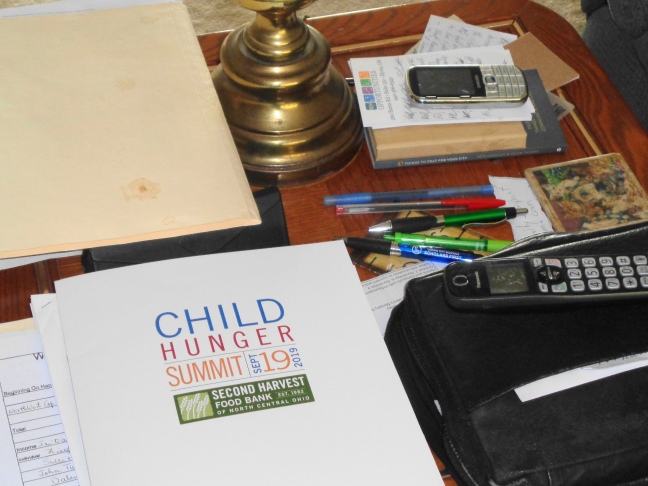 Several clients have said this to me as I check them in at We Care We Share, a food pantry and clothing closet on East 31st Street in South Lorain, Ohio.

Residents across the county can pick up a food box every four weeks at our food pantry. There are other pantries around and many of our patrons visit them as well. There’s nothing wrong with that.

In the United States.

One in five children in Ohio is “food insecure,” John Corlett, president and executive director of the Cleveland-based Center for Community Solutions, told several hundred of us who attended the inaugural Child Hunger Summit on Thursday at Lorain County Community College in Elyria.

Corlett defined food insecurity as “a household’s inability to provide enough food for every person to live an active, healthy life.”

One in five children lives in such a household. 20 percent of our impressionable young people.

It takes a wide-ranging, comprehensive approach. Stagnant wages, unhealthy lifestyles and government programs that too often exclude those who need them all are issues that hungry people face.

Half of food-insecure families in Ohio don’t qualify for SNAP because they make a little too much money to qualify for the federal food assistance program, Corlett said.

Families seeking public assistance – and those who receive it – often are stigmatized as lazy people who sit around accepting handouts. But most people on assistance programs, including SNAP, hold down one or more jobs and still can’t make ends meet, Corlett said.

He advocated expanding basic programs such as SNAP and WIC – which assists pregnant women and families with infants and children up to age 5 – to reach more people who need them.

While not a poverty issue, this is a main sticking point in the United Auto Workers’ strike against General Motors Corp., which began earlier this week. Many workers, especially new hires, can’t afford to buy the vehicles they make.

Autoworkers also are seeking job security, noting that GM made a big profit last year – $35 billion, according to some accounts.

At the We Care We Share food pantry, I see families – often with a single mom as head of household – who move frequently. It’s not unusual for the address in our computer to be different than the address on her driver’s license. It’s also not unusual for her to give me yet another address.

Food insecurity has many ramifications.

I don’t probe, but I wonder if at least some of these families were evicted. Or at least have trouble making a rent payment.

The federal government can help food-insecure families, Corlett said. The Earned Income Tax Credit is the best government program to reduce poverty by providing income through the tax system, he said.

SNAP – the Supplemental Nutrition Assistance Program – reduces adult obesity by 16 percentage points and increases the likelihood of children completing high school by 18 percentage points, he said. (The median SNAP benefit for households with young children is $12.86 per day – often for a household of two or three people, so that money doesn’t go very far.)

And yet SNAP, WIC and Medicaid participation are dropping, for several potential reasons:

SNAP and other federal programs are not intended to provide all of a family’s food, said Sandy Moraco of Elyria-based Lorain County Department of Job & Family Services. The “S,” after all, stands for “Supplemental.”

Starting Oct. 1, Moraco said, eligible families may apply for SNAP benefits by phone: (844) 640-OHIO. That will save time and require fewer in-person visits by clients, she said.

Food insecurity has multiple causes and requires multiple solutions. All of us in this country must work together to ensure that our residents have access to the most basic rights of human life.

A full stomach. Knowing where our next meal is coming from. Access to health care. A roof over our heads that we can afford.

I haven’t mentioned transportation, but that’s an issue too. We need a dependable way to get to work, to the doctor’s office, to the grocery store.

Most of us take these things for granted. We shouldn’t.

That’s why I volunteer at a food pantry. Perhaps there are other things I can do as well to help those around me overcome food insecurity.

Will you join me in this effort?